Docker the new form of Virtualization

Docker is becoming popular day by day because of their approach of using the container as the base for the system.

If we go by the definition of the Docker that is available in Wiki, it goes like this: "Docker is an open-source project that automates the deployment of applications inside software containers."

The definition itself is pretty clear that Docker gives the opportunity to run the application inside the so-called hot topic termed as Containers.

Also continuing the Wiki article only, Docker containers wrap up a piece of software in a complete filesystem that contains everything it needs to run: code, runtime, system tools, system libraries – anything you can install on a server. This guarantees that it will always run the same, regardless of the environment it is running in.

This means that it is actually filling up the gap that almost every one of us had faced in a way or the other like by saying that the build is working on my machine and I don't know why it is not working in yours.

When you create an application and sets the environment to make the app work, the problem starts since there may be the chance that the guy who is trying to build the application in his machine might miss 1 or 2 steps or the steps might differ since his machine has different applications and versions including the different Processors and hardware which might affect the overall process. So docker comes into the picture and it actually fills the gap in a way or the other. The execution model of the Docker is somewhat like this: 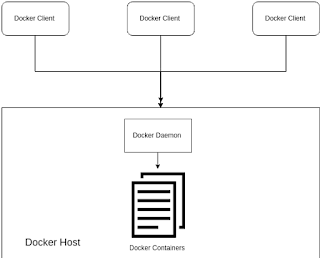 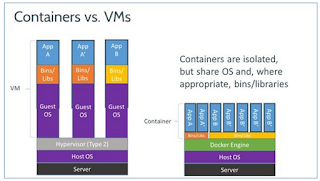 If you see the architecture you can see that the Docker Container never knows on which platform the image is running, actually internally Docker Engine takes care of all the stuff. On one side where VM architecture actually shares the hardware of the Host itself the Docker just shares the process of the Host and creates a whole atmosphere around the host making it a very lightweight and easy to use.

When comparing Docker with VM we can say that VM's are the running instances of OS on the same machine that is wastage of resources and also, not a correct way of using the resources.

Coming back to the main deal, Docker has some specific terms that might come again and again in this tutorial. They are as follows:
Docker Installation:

Coming to the support for the Docker, they are best supported in Linux environments, since the concept of Containers is best integrated with Linux environments,. Although only the installation may differ whereas all commands which we use with respect to Docker will be same in all the environments.

So let us take the first step of installing Docker in our machine (for Mac and Windows user please refer, here, refer OSX and Window part :) ).

For Linux Users please use:

For Mac Users please use:

In order to test whether or not the docker is installed perfectly, you can use a command as well to check:
Creating the first container:
The Containers are the Active version of the Images and Images, in turn, are Passive in nature. In very simple context we can say that the Images are Classes and Containers are its lively Objects.

So when we say we have to spawn a container it is mainly the spawned version of an Image. Also whenever you tell docker to instantiate a container for a specific image it first tries to search the image in local and then searches the same in Docker Hub. Only if the image is not available in local, the image is being downloaded from the Docker Hub (cloud), saved in local (for future references) and then is used to create a container with it.

One of the important things to note regarding Docker is that it is mainly a command line tool(CLI) so you need to learn lots of commands in order to interact with Docker. So for the first exercise of Creating the Container. In order to overcome this burden, some great minds have developed many Frameworks to give you the ease of Interactive Interface that can be used to interact with Docker. Among them, one is Portainer which can be used very easily. It itself comes as a Docker Image so you can just start its container and start using it very easily.

Follow this page for installing the Portainer Container with its image in local.


The commands are pretty self-explanatory. The first command is creating a volume to store the data being created in the container so that you can take a backup or so. And the second command is creating a Container which runs in daemon (-d) mode, with the port (-p) 9000 of the host being mapped to 9000 of the container, with volume (-v) created in the first step via image portainer/portainer.

The above step spawns a Docker Container and exposes 9000 as a port. So you can now go to browser and http://localhost:9000 and check the page of Portainer. 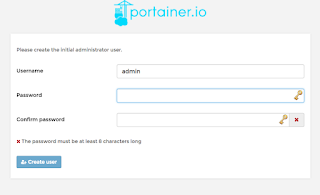 The left panel has the shortcuts and right panel will show the UI respective to the option you chose.

So let us suppose we want to create a container of Nginx, so for that, we need to go to Docker hub and search for Nginx Official Image.

The significance of Networks:

Networks are very important part of Docker installations. We can create networks and assign the subnet masks and ranges to the networks that can be used while creating the Containers so, the containers belonging to the same network can talk to each other via the network IP being allocated to them.

When the Docker has installed it comes with 3 default network types(For mac). They are:
The bridge network is responsible to create a communication between the containers belonging to the Bridge network.

Here is the command to see the details of the network:

By default when a container is being spawned it goes random network we can specify the network, by:
By properties of networks, the docker container belonging to different networks can't talk to each other by default, we have to do some kind of Network Configurations in order to do so. But the containers belonging to the same network can talk to each other by default via the IP Address that is allocated to it randomly in the Address Range of the network.

For practice session, we will create 3 different Containers of Nginx and try let them talk to each other.
Example of MongoDb and AdminMongo:

In this, we are going to run a mongodb container and adminmongo container under the same network and then we will make them talk each other.
So we have actually created a network based stack of AdminMongo and Mongo.

The significance of Images with Tags:

The images what we pulled from the docker hub are mostly with latest tags. You might be thinking what are Tags.

Tags are just the namespace/versioning identity that the creator of the image uses in order to keep track of the development in the image.
So what I mean is it's just the version number that tells the user what they are going to get if you create a container over that image.

So let us take an example. If you say docker pull mongo, irrespective of any version of the mongo you always be having the latest build of the mongo in that image. At the same time, you can pull the tag-based image of mongo that tells which version of mongo you want to download the image of. So if you go to the official image repository page of Mongo, here,  you can see that you have different tags available with respect to the type of version you might get when you download the specific image with the tag, like this, docker pull mongo:3.0.15. This is the significance of Images with Tags.