Today we are going to look in to one of the most common pattern used in Software Development. That is Singleton Pattern.

Before moving forward let me give you a brief description of what is a Design Pattern and how it is useful in one or more ways?

Now the statement is quite clear that it is not a rocket science and it is just the way of solving a problem which is common in the market.

Ok, now when we understand the basic idea of the design patterns let us take a look on to its types or in other words categories.

Categories:
There are 4 categories under which the design patterns are divided. These are as follows:

I will not go in the inside of these because it would be a totally new and big topic to discuss but just want to give you an idea that Singleton Pattern is one of these patterns and comes under Creational Pattern.

Singleton Pattern:
In software engineering, the singleton pattern is a design pattern that restricts the instantiation of a class to one object. This is useful when exactly one object is needed to coordinate actions across the system.

Ok, so if you need an object to be instantiated once, per JVM per Application  we use singleton pattern to achieve this. 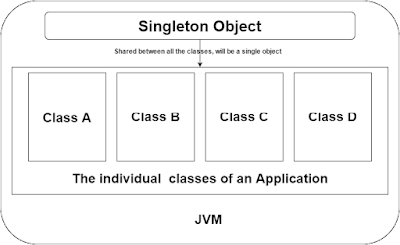 The above diagram shows a basic idea of how singleton works.

Now there are many ways of creating singleton objects.
Some of the points that we have to take care about are:
At last we will look in to the Enum style of creating the singleton.
Lets see  each one of the above style 1 by 1.


This is very easy to use and also easy to understand but as you can see it is eager in nature which means we have to create the object beforehand that means the object is in memory even if we don't want to use it.

Using reflection to break singleton pattern from above styles.
The reflection is an API provided by Java that gives you the functionality to manipulate the objects in the run time. Reflection is commonly used by programs which require the ability to examine or modify the run time behavior of applications running in the Java virtual machine.

The output clearly showing that both the objects are different and unique and not the same which is the promise of the singleton pattern.

Now lets look on to the Enum style of creating the singleton objects:
Posted by Ankur at 10:49 PM